As a result of current increasing global warming issues, the environmental pressures on vehicle manufacturers to reduce their vehicle exhaust Carbon Dioxide (CO2) emissions and improve fuel economy has now been reinforced with EU Legislation. This new EU legislation on emissions targets passed in 2009 commits vehicle manufacturers to cut the average CO2 emissions from new vehicles to 130g/km by 2015 and 95g/km by 2020.

Various methods are being used to influence the vehicle manufacturers to reduce CO2 emissions from their vehicles which include:

Other costs to be introduced on high emission vehicles include a government “Showroom tax” on new vehicles which is proposed to be increased over forthcoming years based on fleet average emissions of vehicles made by a particular manufacturer.

Legislation discussions have stated figures of up to 250€/gram of CO2/km may be charged based on the manufacturer’s average fleet emissions which exceed the legislative level for the time period between emissions reduction targets This charge will be applied to every vehicle sold by that manufacturer.

Based on figures published by the Department of Energy and Climate Change DECC (2012), in 2009 motor vehicles contributed 69.7 million tons of CO2 to the UK atmosphere which is 13.8% of the total published CO2 emissions in the UK. The UK average new car CO2 emissions in 2004 was 171.4 grams of CO2/km compared to the 2011 reduction target of 138.1grams of CO2/km which equates to a 19% reduction.

To meet the growing environmental challenges posed by the introduction of emissions legislation, vehicle manufacturers have developed various eco-solutions to help drivers save fuel and reduce vehicle CO2 emissions. Some initiatives are related to changes in the battery technology and requirements and some are not, for example:

Looking at the effect on volume vehicle sales, the following initiatives require changes in battery technology to support their implementation: 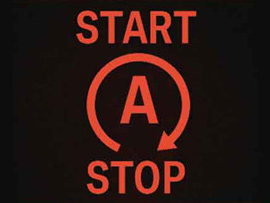 The introduction of Stop/Start technology has resulted in a new band of battery failure modes not previously experienced by vehicle manufacturers. This is based on evidence collected from a recent time dependent driving experiment. The experiment featured a journey across London which produced 87 Stop/Start cycles which when compared with a comparable timed motorway journey produced zero Stop/Start events as the feature was not activated

These new requirements clearly expect significantly more from the battery and the technology has to be improved to match the further increase in demands.

It is clear from the developments in vehicle technology that the battery is becoming a critical component in ensuring that the new ECO initiatives will deliver the increases in fuel economy and reductions in CO2 emissions required by legislation.

It is impossible to expect the current day conventional flooded Lead Acid battery to meet the requirements of Stop/Start and Micro hybrid 2 and 3 vehicles. New battery technologies have therefore been developed over recent years to meet the increasing demands of the vehicles now entering the aftermarket. It is therefore essential to replace the OEM specified battery with that of the same or increased technology and specification in the aftermarket.

The installation of a conventional flooded Lead Acid battery to a Stop/Start only vehicle will result in a significantly reduced battery life and increase the likelihood that the battery will go flat in service. The battery will also be unable to recover sufficiently during its residual drive cycles.

The installation of a conventional flooded Lead Acid battery to a vehicle fitted with a charge management and regenerative braking system will also lead to a significant reduction in expected battery life and an even greater likelihood of the battery repeatedly going flat in service. The charge acceptance of the battery is therefore even more critical in order to ensure that the battery can efficiently accept the available current produced by the alternator and the regenerative braking system.

The constant requirement for more efficient, cleaner and technologically advanced vehicles means that the introduction and development of vehicles featuring these systems will have increased to approximately 70-80% of all vehicles produced in Europe by 2015. This equates to over 30 million vehicles within the EU alone. The enforcement of EU emission reduction legislation will affect vehicle manufacturers sales against competitors who have invested and gained the fuel and emission savings.

For high volume production vehicles beginning in 2008/09, two advanced development modifications of the conventional flooded Lead Acid battery are currently being installed. The first generation of these vehicles is now starting to enter the aftermarket. These are: 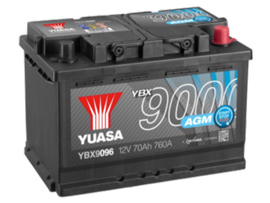 The AGM battery has been designed to fulfill the very special requirements of modern day vehicles which feature high levels of electrical equipment and emission target driven Carbon Dioxide (CO2) reduction control systems such as:

The AGM battery shares a number of design features with the conventional flooded Lead Acid battery but with additional technologies from Industrial and Motorcycle batteries, such as:

The AGM battery has unique features that differentiate it from traditional conventional flooded Lead Acid batteries and dramatically increase its all-round performance in an automotive application. These include: 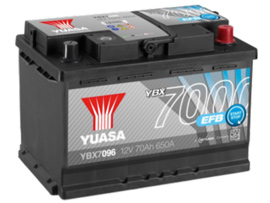 The EFB is based on a conventional flooded Lead Acid battery design but with improved specification and performance. Featuring increased cyclic durability and an improved ability to accept charge current by various changes to battery construction and materials.

EFB technology offers a cost effective solution for low specification entry level vehicles, where the battery is not operating across such a low range of State of Charge (SOC) as an AGM battery. This is due to the vehicle manufacturer having to reduce vehicle CO2 emissions by a lower amount to meet EU reduction targets as base line vehicles already have a lower CO2 emission level than the high performance and specification vehicles where an AGM battery is required. 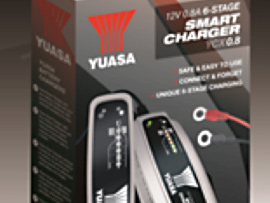 When installed on the vehicle, AGM battery charging voltages are the same as for any standard battery with no need for any special adjustments to the charging system. This is due to the extremely low internal resistance of the AGM battery resulting in almost no heating of the battery even under conditions requiring high charge and discharge currents.

Due to the extremely low internal resistance of AGM batteries, the acid starved design and reduced charging and discharge time it is essential when charging off the vehicle that the correct type of equipment is used.

Constant current or boost chargers must not be used as this will result in:

All of these factors will greatly reduce the lifespan and performance of the battery and cannot be rectified due to the sealed VRLA design.

Due to the high retail cost of replacement AGM batteries retailers will encounter customer resistance to the compulsory purchase of an AGM battery over conventional flooded Lead Acid or EFB battery types based on the level of technology on their vehicle.

Installation of a conventional flooded Lead Acid or EFB type over an AGM battery will result in premature battery failure caused by the following:

The installation of a more attractively priced conventional flooded Lead Acid or EFB type battery instead of the specified AGM battery will quickly lead to the loss of Micro hybrid functionality on the vehicle. Inoperative Micro hybrid systems will increase emissions of CO2, reduce fuel economy and result in the premature failure of the battery. Indications of premature battery failure are battery going flat or being over cycled.

The installation of a more attractively priced conventional flooded Lead Acid battery instead of the specified EFB battery will quickly lead to the loss of Micro hybrid functionality on the vehicle. Inoperative Micro hybrid systems will increase emissions of CO2, reduce fuel economy and result in the premature failure of the battery. It is essential that the battery is replaced with an equivalent quality EFB battery or higher specification AGM battery if recommended by battery manufacturer.

A conventional flooded Lead Acid battery should not be installed to OEM equipped AGM or EFB vehicles.

It is becoming increasingly common that installing new batteries to “Micro hybrid” equipped vehicles requires the European On-Board Diagnostics (EOBD) error codes to be reset and the replacement battery registered to the vehicle. This is so that the charging control system can be reset and full vehicle functionality regained.

Whether the vehicle requires system resets or battery registration/coding should be advised by the retailer of the battery at the time purchase. The battery retailer should be required to advise the customer how and where the reprograming of the vehicle can be carried out. This gives the customer the information to find their own reprogramming option.

The retailer must also note that the battery was clearly sold with advice only and the vehicle was not reprogrammed by the retailer. This is not the recommended supply option by the battery manufacturer.